When injury results in loss of life of the insured within twelve (12) months after the date of the accident, the insured will get the principal sum of Php50,000.00.

When injury does not result in loss of life within twelve (12) months after the occurrence of the accident, but does result in any of the following losses, AXA will pay the equivalent as stated below: 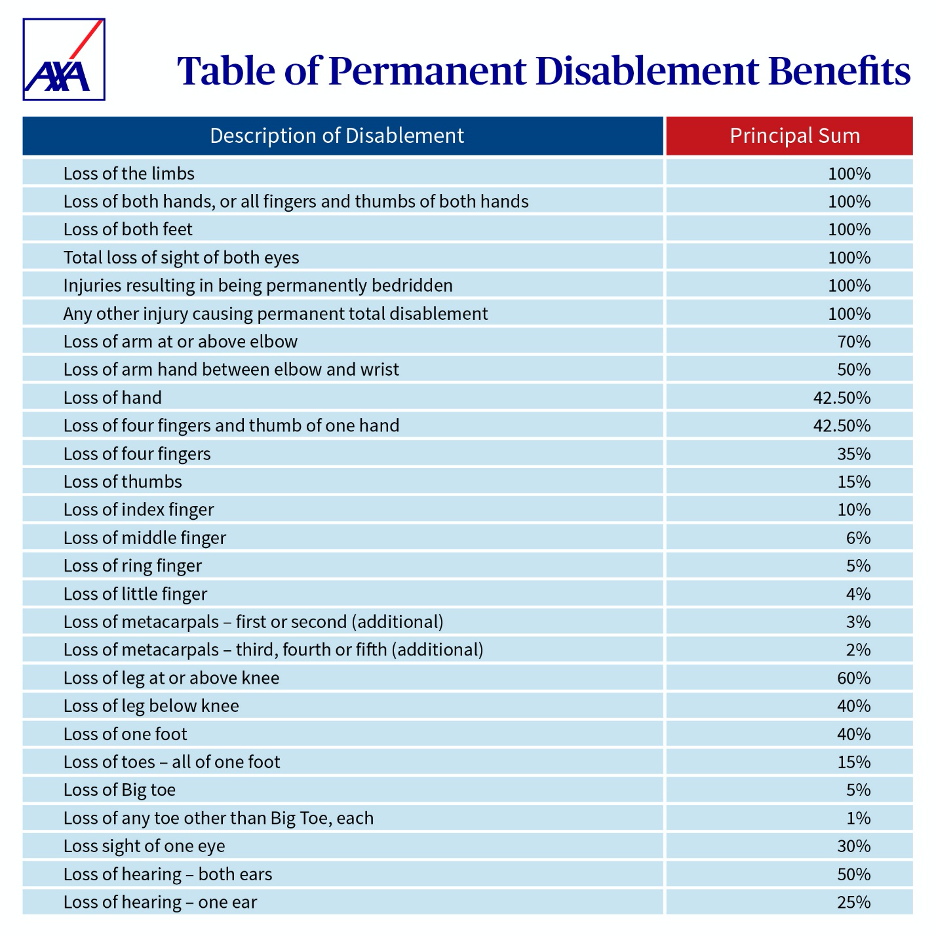 1. Any person can register up to two (2) cards at a given time. Any card issued in excess shall be considered null and void. In an unforeseen event, the Company shall not be liable for more than the applicable amount for any person per event.

1. A written notice shall be given to the Company without unnecessary delay within 30 days in case of death from date of accident/injury.

2. Any person who is 18 to 70 years old during the policy period is eligible to register.

3. In the event of claim, all certificates, information and evidences required by the Company must be furnished at the expense of the Insured or his legal representatives, and shall be in such form and of such nature as the Company may prescribe. The Company shall, in case of death of the Insured, be entitled to have a post mortem examination at its own expense.

4. The Insured must give immediate notice in writing to the Company of any change in address, profession or occupation and the effecting of other insurances.

a. Widow or widower, or

b. Surviving Children, or

d. Surviving Brothers and Sisters, or

7. No assignment of the benefits of this policy shall be binding upon the activation of coverage via the link sent to the Insured’s email. The Company does not assume any responsibility for the validity of the assignment.  No change of beneficiary under this Policy shall bind the Company unless consent thereto is formally endorsed hereon by the Company.

8. This policy constitutes the entire insurance contract.  Any rider, clause, warranty or endorsement purporting to be part of the contract of insurance and is pasted or attached to this policy is not binding to the Insured.

9. Completed claim forms and written proof of loss must be furnished to the Company within ninety (90) days after the death of the Insured. Failure to furnish such proof within the time required shall not invalidate nor reduce any claim.  If it was not reasonably possible to give proof within such time, the same must be given as soon as it is reasonably possible.

11. If a claim made was rejected and an action or suit be not commenced either in the Insurance Commission or any court of competent jurisdiction within twelve (12) months from receipt of notice of such rejection or in case of arbitration taking place as provided herein.  Twelve (12) months after due notice of the award made by the arbitrator or arbitrators or umpire, the claim shall be, for all purposes, deemed to have been abandoned and shall not thereafter be recoverable here under.

1. Death, disablement or bodily injury, occasioned by or happening through:

a. War, invasion, act of foreign enemy, hostilities (whether war be declared or not), civil war, rebellion, insurrection, mutiny, military or usurped power, violence occurring in any assembly or demonstration, civil commotion, riots, strikes, military or popular uprising and terrorism.

b. Suicide, attempted suicide (whether felonious or not, sane or insane), hernia, alcoholism, intoxication, drugs, intentional self-injury, insanity, diseases or infections (except pyogenic infections which shall occur through an accidental cut or wound).

f. Any weapon or instrument employing atomic fission, radioactive force, whether in time of peace or war.

g. Performing or attempting the performance of an unlawful act.

h. Engaging in or performing any exhaustively physical, extraneous or hazardous sports or activities.  Extraneous and hazardous activities/sports is defined under this Policy as, any activity that involves chance or adventure increasing peril or putting at risk and in jeopardy the life of an insured person.  While exhaustively physical activities are those activities that excessively require intense physical effort. This includes professional athletes, acrobats, extreme sportsman, automobile racing drivers, stuntmen, aviators, boilermen, explosive makers, sawmill workers, loggers, and the like.

i. Murder and assault or any attempt threat.

j. While riding a two-wheeled motorcycle without a crash-helmet or a valid driver’s license.

2. Death, disablement or bodily injury, occurring while the insured is traveling in an aircraft other than the one licensed for public passenger service. Operated by a regular airline on a published scheduled flight over a regular air route between two definitely established airports in which the insured is traveling as a ticket-holding passenger.

3. Death, disablement or bodily injury consequent upon the insured engaging in hunting, racing of all kinds, steeple chasing, polo playing, mountaineering, winter sports, ice hockey, football, yachting, or using wood working machinery driven by mechanical power, as a type of sport hobby or for any other purposes.

4. Death, disablement or bodily injury, consequent upon the insured engaging in the making or handling of explosives.

5. Death, disablement or bodily injury occasioned by or happening through pregnancy or childbirth.

Notwithstanding any provision to the contrary within this insurance or any endorsement hereto attached, it is agreed that this insurance excludes death, injury, illness, loss, damage, cost or expense of whatsoever nature directly or indirectly caused by, resulting from or in connection with any of the following regardless of any other cause or event contributing concurrently or in any other sequence to the loss;

For the purpose of this endorsement, an act of terrorism means an act, including but not limited to the use of force or violence and/or the threat thereof, of any person of group(s) of persons, whether acting alone or on behalf of or in connection with any organization(s) or government(s), committed for political, religious, ideological or similar purposes including the intention to influence any government and/or to put the public, or any section of the public, in fear.

This endorsement also excludes death, injury, illness, loss, damage, cost or expense of whatsoever nature directly or indirectly caused by, resulting from or in connection with any action taken in controlling, preventing, suppressing or in any way relating to (1) and/or (2) above.

If the Insurer alleged that by reason of this exclusion, any loss, damage, cost or expense is not covered by this insurance the burden of proving the contrary shall be upon the Assured.

In the event any portion of this endorsement is found to be invalid or unenforceable, the remainder shall remain in full force and effect.

HOW TO MAKE A CLAIM

1.       Download and fill out the Personal Accident claim form.

2.       Submit the claim form along with the complete documentary requirements online to customer.service@axa.com.ph or to the nearest AXA branch.

3.       Wait for confirmation if your request has been approved.

4.       Receive the payout via you preferred channel.

·       Police Investigation Report and Statement of Witnesses (original or CTC)

·       Police Investigation Report and State of Witnesses (original or CTC)

·       Hospital Records – for amputation and operation performed by attending physician

·       Picture of Amputated/Affected Body Part/s of the Victim

*CLOSE THIS WINDOW AND GO BACK TO REGISTERING YOUR PIN